×
At long last, I was finally able to purchase slip-ons for my bike!!!!  Vance and Hines 4" Monster Rounds!  Obviously, this is an exciting moment.  Now the thing will finally sound like a Harley, not an air compressor.  I'll never forget the first day I pulled up to work on my new Harley.  A couple of ladies from work were on their smoke break, and they noticed I had a new bike.  They came over and said, "Ooooooh, you got a new bike! What kind is it?"  I replied, "It's a Harley Street Glide."  They kinda looked it over, told me how beautiful it was, and then made a comment, "It doesn't sound like a Harley."  YAAAARG!!!!!  It was a bit embarrassing.  So the saving began for at least some slip-ons to give it the rumble the thing deserves.
I talked to a lot of chapter members about pipes, slip-ons, straights, etc. to make the decision on what to get.  I went to the dealership and talked with Gary in the service department about options.  He got excited to show me different pipes and let me hear them.  I would say he spent a good 30 minutes in the parking lot starting up bikes with different pipes to let me hear the differences.  The V&H monsters were the ones for me.
The good thing about the slip-ons is that you don't have to do any intake modifications or mapping.  You get quite a bit more sound, and deeper rumble, and they're easy to install.  Down the road, a long time down the road, I may consider some V&H headers and intake but for now, this will be just fine.  The next step of exhaust investment is kind of heavy so it's just gonna have to wait.
Side note: (The Street Glide stock shocks are air, you can see in the picture the new Burly Slammers I put on a few months back.  Unfortunately, I didn't take pics of the process of installing them at home.  It would have made a nice blog to show how easy it is and that just about anyone can do it.)
So onwards to the installation.  I took a few pictures of the process, but there really isn't much to it.  First, take off the saddlebags. 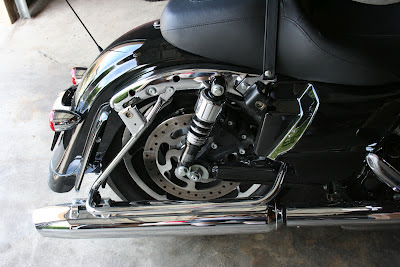 I like to put the saddlebags on a cloth to prevent scratching the bottom. 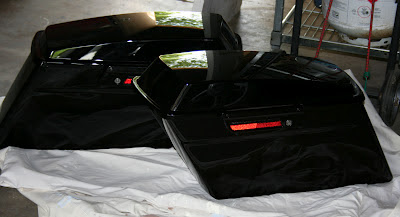 Now you have to take off 2 screws that hold and support the rear of the muffler to the saddlebag support (½ inch socket) and loosen one bolt that holds the muffler onto the header (9/16 socket).  Do this for both mufflers. 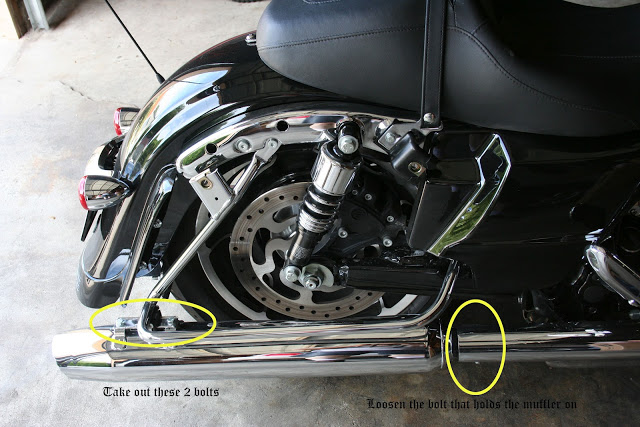 Then just sit down on the ground behind the bike, brace it by putting your foot on the rear tire, grab that muffler, and wiggle it while pulling.  It's really that easy, and it will just slide off. Then literally just slip the new ones on; use the 2 bolts that you took off the rear portion of the original mufflers to secure the new ones to the saddlebag support.  The slip-ons have a bolt to secure them to the header, which is the same as the stock mufflers.  The only thing you might want to do is measure the distance from the saddlebag support to the end of the slip-ons to be sure they stick out the same distance at the rear of the bike before tightening the bolts.  Once you have them on, be sure to wipe them WELL to remove any oil or residue of any kind.  If you don't and you have smudges, oil, fingerprints, etc., when you start the bike and the slip-ons warm-up, those smudges will permanently be ingrained in the chrome.  I wiped mine, then used chrome polish before starting it up.

Here is the before pic with the original stock mufflers. 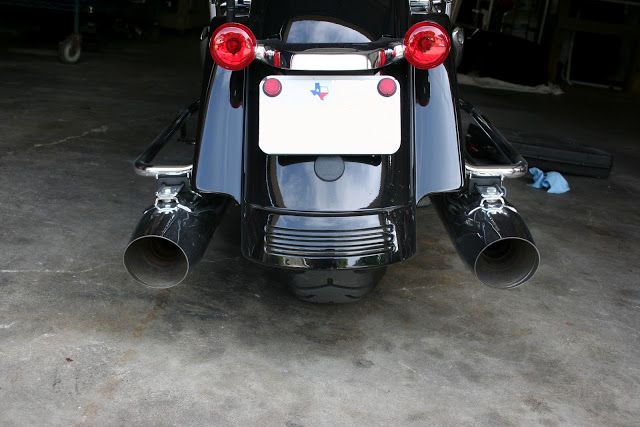 And here it is with the new slip-ons. 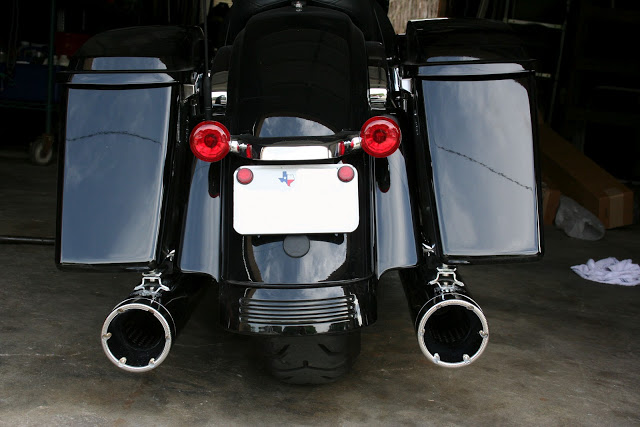 It took 30 minutes from start to finish to install.  Anyone can do it, and you only need 2 basic tools to do it.  They look and sound great.
Here is how it looks from the side. Bah, not the best picture, but it will do. 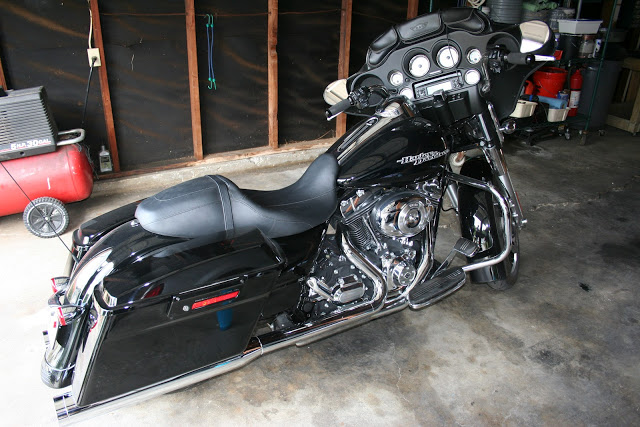